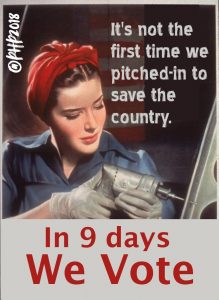 It was a throw-away, a 20 minute time investment in a countdown to election day. One of 45, plugged into Hootsuite to release on social media over a weekend when attention would be elsewhere.

Two days later, the redress of a World War II poster had received more than 1,000 likes, been shared 11,500 times, and been seen by 562,000 people. The conversion is still under way, but it looks like it will result in about a thousand new followers for the sponsoring People’s House Facebook page. (The 45 element countdown campaign resulted in something like 4,000 likes, 20,000 shares, and 4 million impressions on a total time investment of about 19 hours.) We also noted a meaningful bump in Twitter followers, presumably from the inclusion of PHP’s Twitter handle in the image.

It sure seems like there must be something to learn from this viral marketing success.

It added fuel to an already burning fire: Women were arguably the driving force of the 2018 election. Almost 3,400 ran for office and millions signed-up as volunteers for various campaigns and causes. They turned-out to vote in record numbers. The creative behind this meme perfectly captured the pride and empowerment half the electorate was feeling.

It was personal: Talking for women rather than about them made passing the meme on a personal statement. “It’s not the first time women chipped-in…” is a factoid. “It’s not the first time we chipped-in…” is an invitation to self-expression , particularly to a group feeling proud and empowered. There is certainly a place for fun-facts people will engage with and pass on. But facts do not trump emotion and involvement.

It was visually distinct: The instantly recognizable style of World War II posters stood-out in a world of stock photography.

It was positive: The character traits associated with the World War II effort — grit, optimism, teamwork — were once considered common to all Americans. Today, they’re a distant aspiration. Standard operating procedure in modern politics would be to leverage fear and anger to generate action.  This didn’t do that, making it easier to pass along and, in the process, protecting the brand of the meme’s sponsor, People’s House Project.

To wrap it up in a tidy bundle: Personality matters. It is as attractive or unattractive in viral marketing as it is in human relations. Set yourself up to charm and support, and the wave will be with you.